One Week Into New Season No Silver Reported

One week into the 2017 salmon season and no fish have been reported caught and only the odd fresh fish seen. It has so far been a disappointing start to the new season given that there have been good numbers of rods out in good weather and water conditions. There seems to be a definite trend to later runs of both spring fish and grilse. What factors are influencing the timing of fish runs, whether ocean warming, climate change or other variables is a matter for debate. What is undeniable is that Atlantic salmon are a key indicator species and all the indications point to major changes at sea which are having a major impact on salmon behaviour and survival.
Looking at our catch register book over the last 40 years, a fish a day was about average for January. Twenty years ago, January 1997 was a below average month with just over 20 fish recorded.
It is a stark warning for the future of salmon angling in Ireland when what would be considered a poor run starts looking like the good old days in the space of just twenty years! 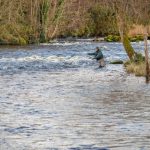 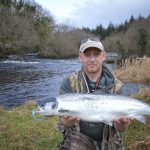