Fishing has been pretty quiet since the start of April with just 13 fish reported for the 13 days of the month so far. The past week has been especially quiet with no fish reported on Saturday, Sunday or Monday despite plenty of rods out over the weekend. The weekend had been very cold with prolonged hail showers and biting east winds. Yesterday was much milder and 2 fish were taken, both on fly. Johnny B had a sea liced 12lbs fish from the Mill Pool on an O’ Malley special yesterday just before midday and Stephen Mc Gimpsey released a fish estimated at 6lbs on a self tied fly from Stakeys yeterday afternoon. This morning Richard Todd had a 4lbs grilse on prawn from the Sea Pool. Among other fish since the start of the month, N. Ritchie released a 5.5lbs fish on fly at the Terrace, J. Ward had a 14lbs fish on spinner from the Old Sea Pool, N. Mc Daid had an 8lbs fish on spinner from the Trout pool, M. Kruse had a 10lbs fish from the Crooked Hole on Rapala, T. Doherty had a 5lbs fish on a #6 Cascade from Brineys, M. Kruse released a fish estimated at 5 to 6lbs on a self tied orange shrimp fly from the Turn Hole, C. Mc Daid had an 8lbs fish from the Mill pool, M. Leslie had a 4lbs fish from the Blackwater and J. Gill released a 9lbs fish on spinner from the Sand Hole.
Temperatures have risen to over 10 Celsius as the wind turns from east to south east. Water levels remain good at just under 0.6 metres on the gauge at the Four Masters’ Bridge. Water temperature remains quite cold for the time of year at just under 8 Celsius.
The forecast for the coming days is mainly dry with occasional showers and more settled, milder conditions likely from the start of next week. 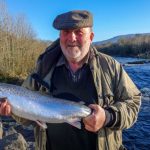 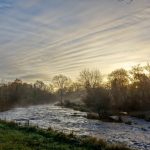 One month to go until the Opening Day of the 2017 salmon season on January 1st.Fishing Reports